LEARN HOW TO READ OTHER PEOPLE'S MIND IN JUST 6 DAYS

India's #1 mentalist will teach you how you can stand out from any crowd & be the center of attention everywhere you go in just 6 days.

Yes make me stand out!

P.S.  You'll become the most charismatic and interesting person

Enroll now and get bonuses worth ₹20,000 absolutely free 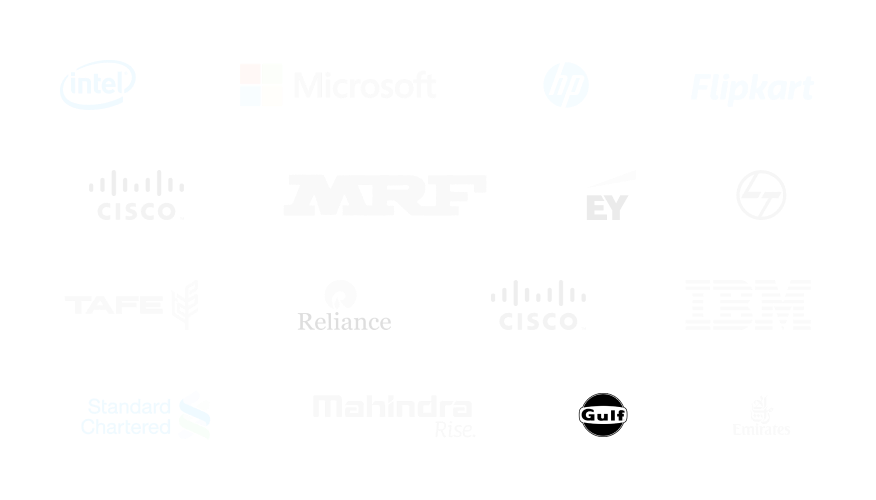 Who is it for other than YOU?

It is all about tapping into the psychology of the customer. You'll understand different ways to emotionally tap into the mind of your target audience and thus increasing your ROAS

For magicians this workshop will open new doors for them. They can combine a bunch of tricks with this which will further enhance their routine and bring more joy on people's faces

People are the foundation of company and as an HR you are in charge of people. This workshop will teach you new ways to be confident so that you can complete your job in an efficient way

Bring out the new you which you thought didn't exist. Creative people will get the most benefit from this course as they will be able to integrate what they learn in this workshop with their current routine and thus be able to do miracle's

When it comes to the dating game, Narpath is married now. Lol.  Imagine going on a date, using the tricks and frameworks you will learn in this course, you'll leave your date spellbound and be the most interesting person they've ever met!

To freshen things up at work and even going in for a new interview you can showoff your tricks and thus standout from the usual crowd. I am sure your colleagues will definitely be entertained and will go out and tell everyone, hey! I've got this amazing colleague at work who performs these tricks 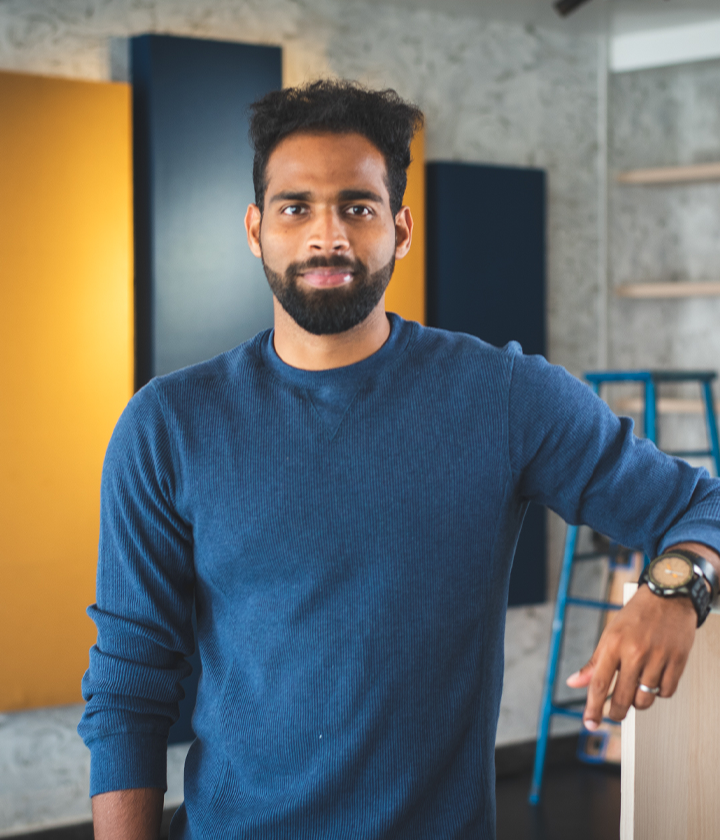 ARE YOU LOOKING TO GET OUT OF YOUR SHELL AND FACE THE WORLD?

Hey! we all have to go through this in our life's right? When I had to leave my day job to work as a mentalist full time, it wasan't easy at all. Initially there was a lot of self doubt whether its the right decision  or will I be able to earn sufficient money as a full time mentalist but by god's grace Today, I am 29 and have had the privilige to do a lot of shows with the big corporates and teach more than 3000+ students this wonderful art that I'm blessed to have. So if I can do it so can you, Now my mission in life is to empower other's and not let anyone give up and help people be the best version of themselves, getting out of your comfort zone is not easy at all however scary it may feel initially but hey there's this one thing I will tell you there is light at the end of the tunnel, so don't loose hope my friend, you're going to get empowered starting today

Make me stand out!

What will You learn?

Get the full course structure

Check out These Two Tricks That You Will Learn In The Course!

CAN ANYONE LEARN MAGIC? YES!

CHECK OUT THESE REVIEWS FROM REAL PEOPLE

More than 3000+ people all over the world who have taken this course tried and tested
all these techniques and loved it. Listen to what other students have to say! 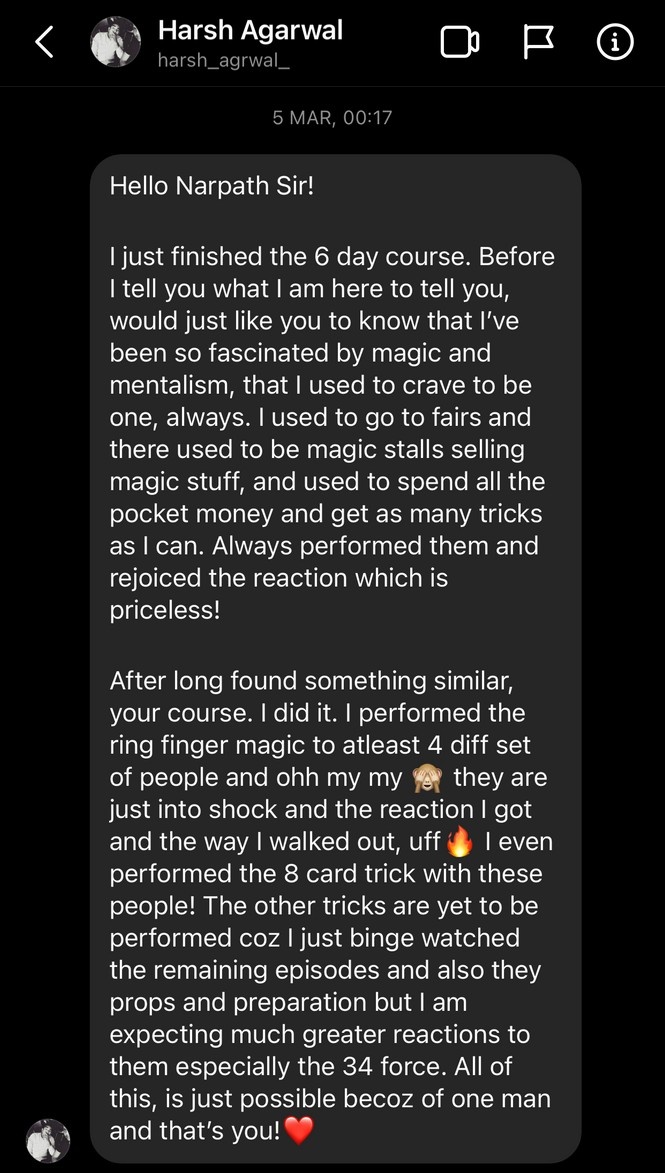 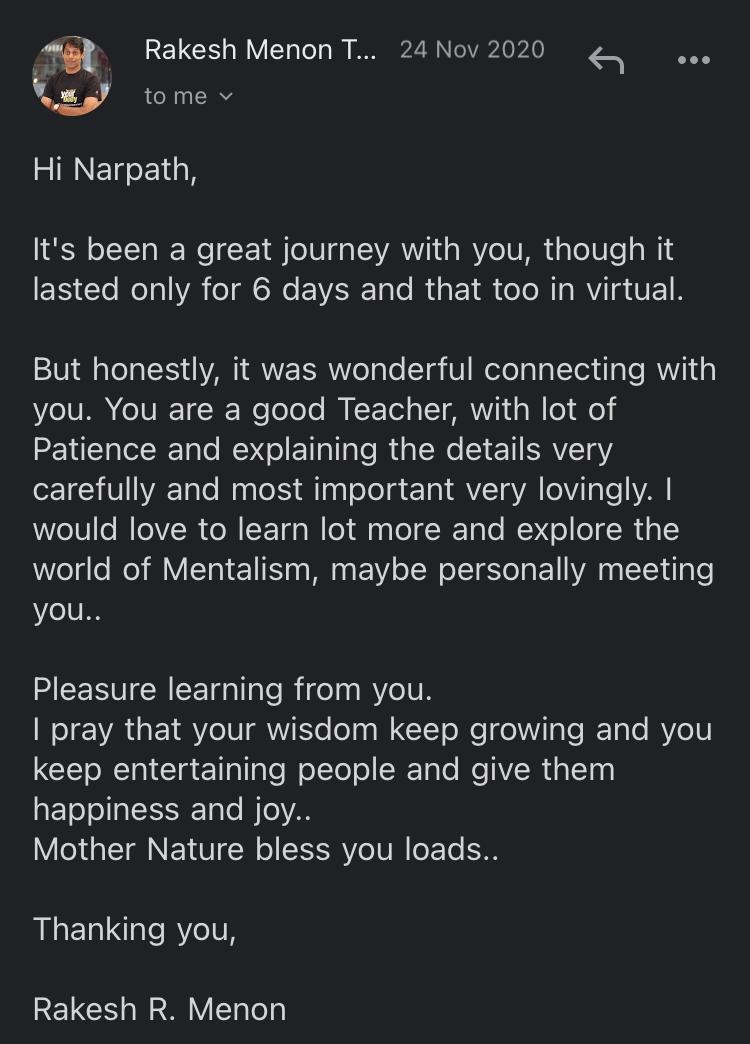 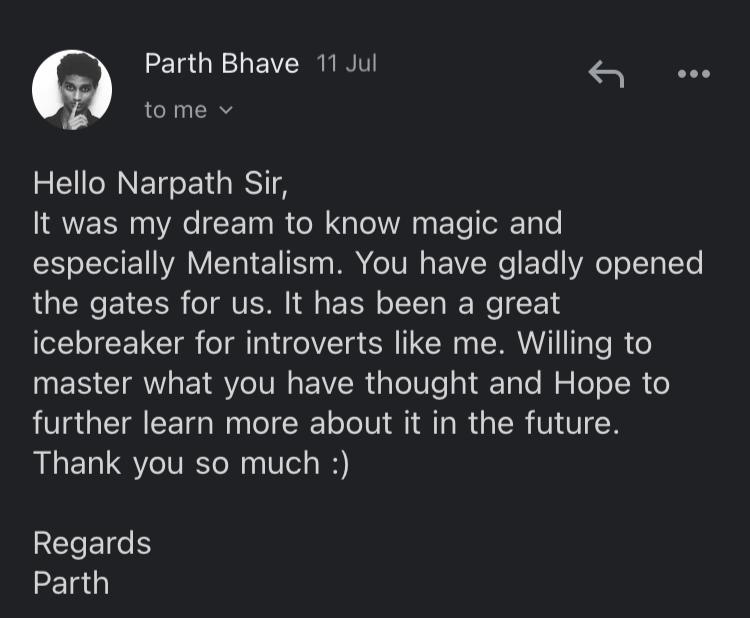 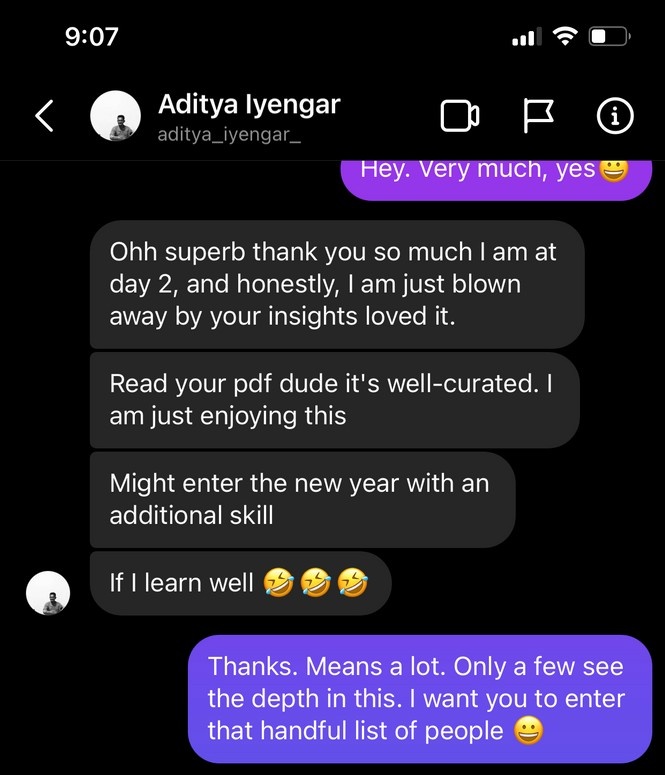 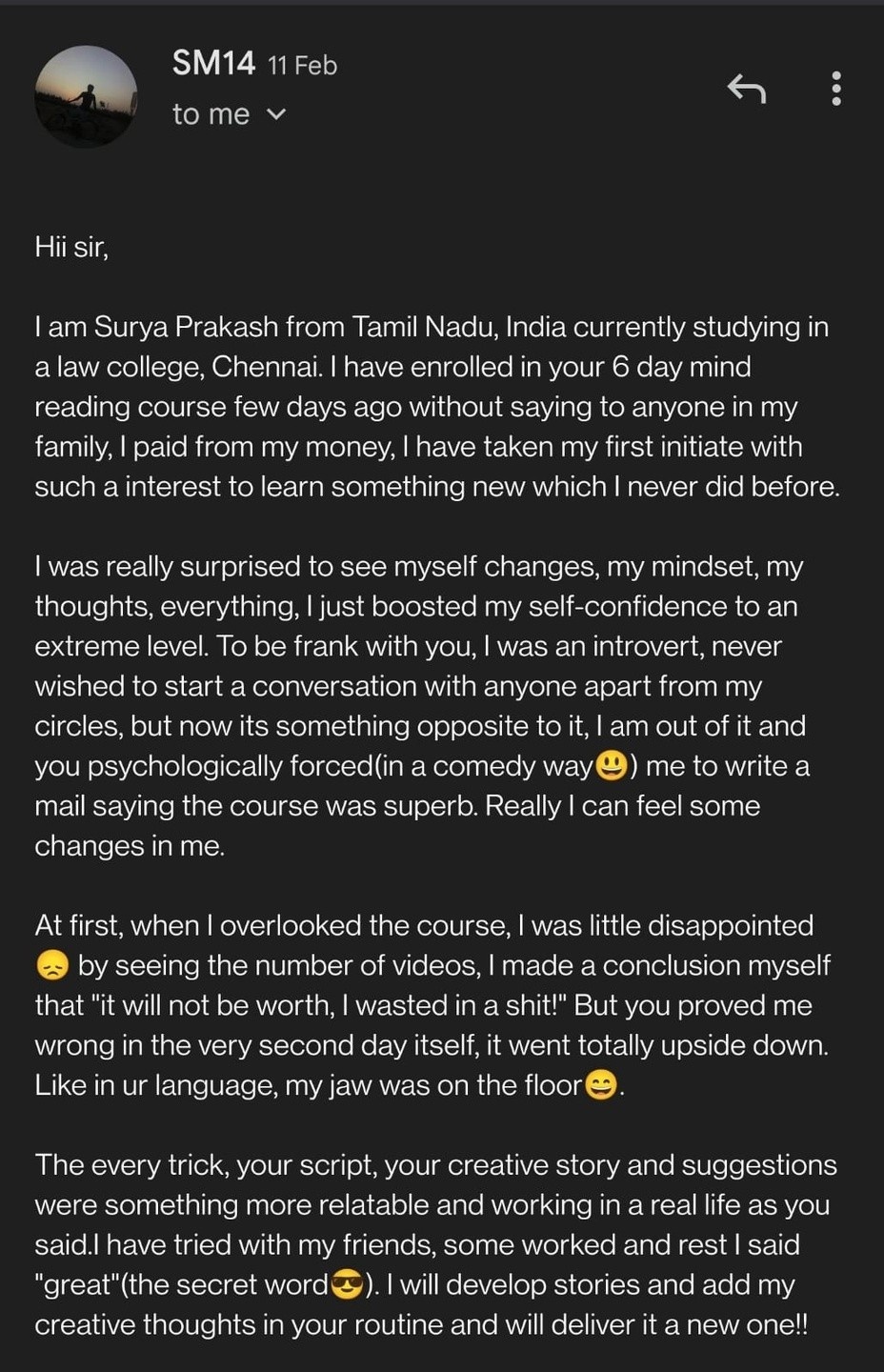 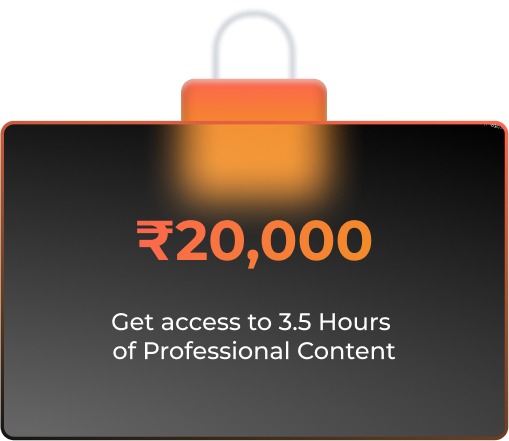 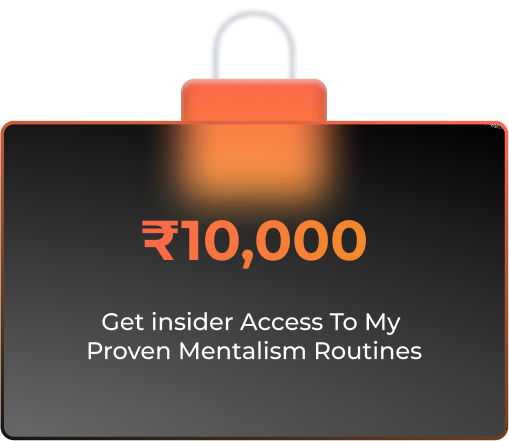 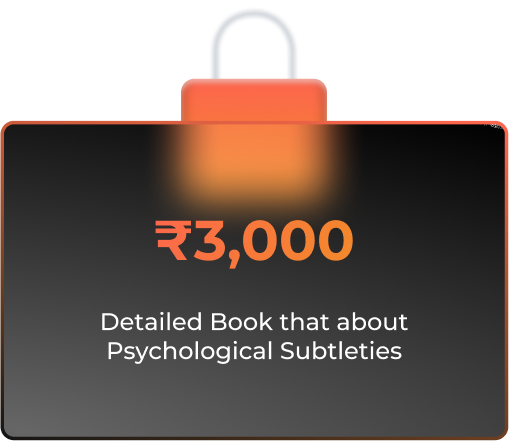 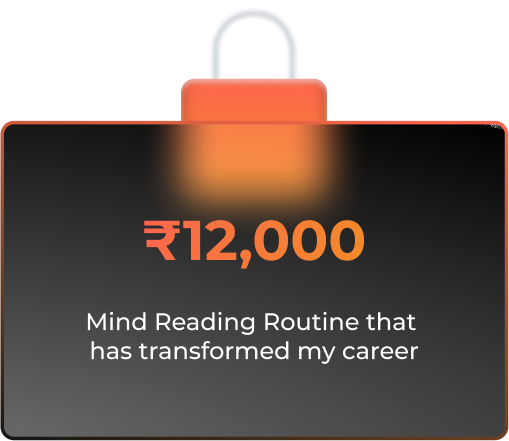 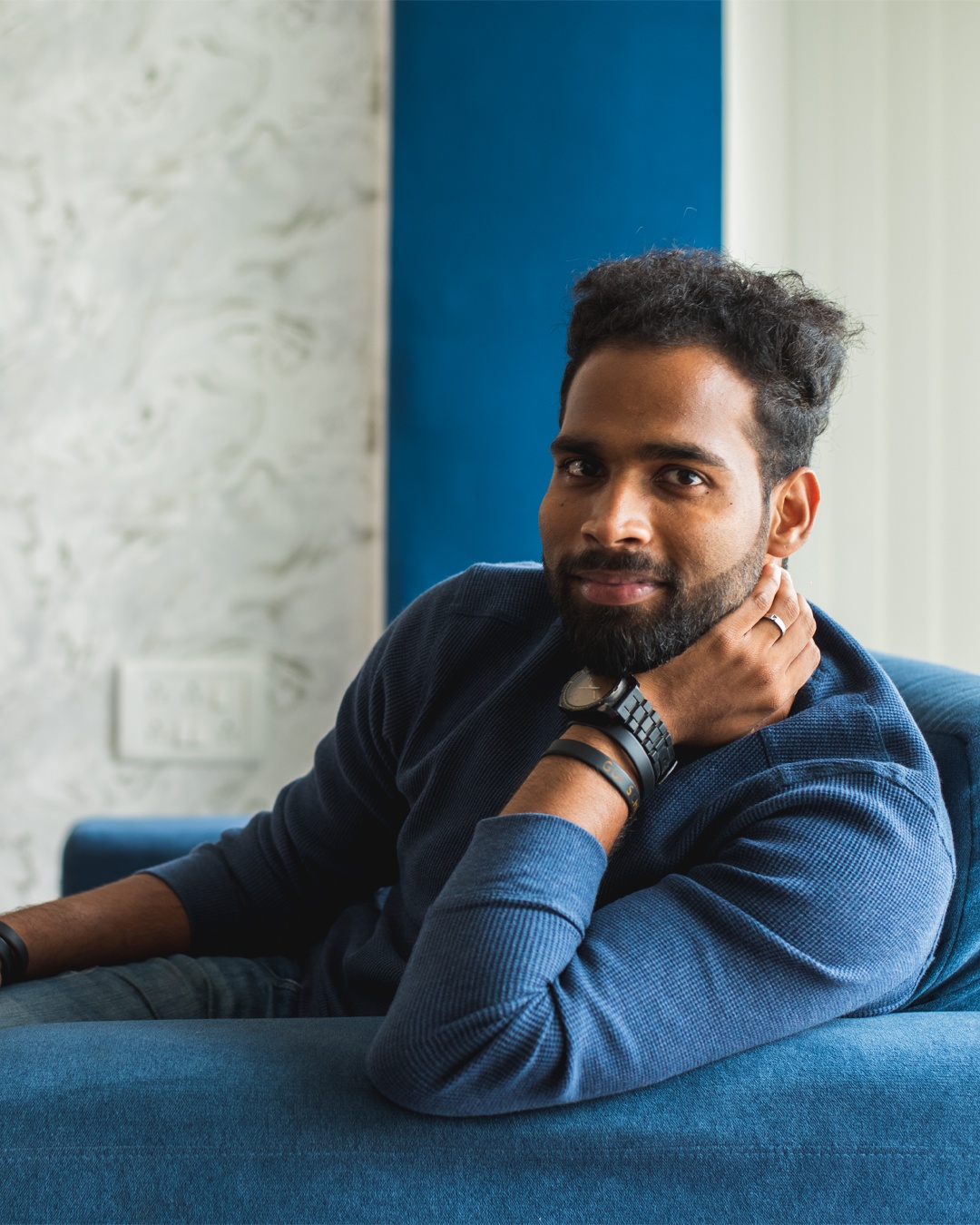 BUT WHY GIVE IT AWAY FOR

I’LL BE HONEST HERE. I DIDN’T WANT TO INITIALLY GIVE IT AWAY.

I know this material will have you doing incredible magic and mentalism starting right away. I know that 6DAY Workshop will improve your life by giving you new skills, building your confidence, making you more popular and more fun to be around.

Once you dig into this Mentalism journey people may never see you in the same way again!

There’s just one small problem: You must HURRY!

Due to the extremely sensitive and secretive nature of the material revealed … this offer could be taken off the market at ANY time... And certainly the Rs 1999 deal is going away very soon!

Cant wait! Make me a Mentalist!!

KNOW THE MAN BEHIND THE MAGIC 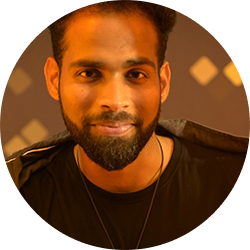 Narpath got into the art of mind-reading at the lowest point of his life. He grew up as a fat, under-confident and an insecure boy until the age of 23. Today, he is 29 and have had the privilege to see himself grow into one of India’s leading mentalists. As a massive fan and practitioner of the law of attraction, He closed his eyes, making a wish to become a Mentalist in a country obsessed with professional stability. He started out as a street performer. To be specific- a street Mentalist. He was a management consultant in the day and a street mentalist in the evening. Being just another average student all throughout his school and college, he never thought of himself being capable of standing in front of a room, say, 100+ audiences and entertaining them. But as they say, where there is a will, there is a way!

Today, Narpath leaves thousands and thousands of his audiences baffled day in and day out. What sets him apart is not only his mind-boggling mentalism skills, but the way he incorporates humor, spirituality and life values in it. This gives an audience the best of both worlds- Information and Entertainment.

Narpath is one of the most influential pioneers in the mentalism scene in India. He's the only mentalist to be named as one of the top 20 inspiring men in 2017. He's got a long list of influential clients all around the world. He's performed on television, for major corporations and celebrities. Especially, MS Dhoni! He's known to have astonished MS Dhoni revealing his first crush to the entire world.

Although what Narpath does is quite supernatural, he's called the Next Door Mind Reader for his simplicity and fun approach. He uses a mixture of Methods-Psychology, hypnotism, Spirituality, and storytelling to pluck the thoughts out of your mind, influence the decisions you will make, and mess with your sense of reality.

And he warns you- If there is anything you didn’t want him to know, don't think about it!

When does the workshop start?

The workshop starts when you make a purchase. You can learn at your own pace

Is this workshop an advanced mind reading workshop?

No. It’s very beginner friendly and I took you through all the basics to set up a strong foundation

I have a full-time job. Would I find time to follow?

Absolutely, yes. You can follow the course at your own ease and leisure

Will this be live or pre-recorded?

Who's the workshop for?

The workshop is designed to lay the groundwork and fundamentals so that it can be applied to people from all backgrounds and professions! I've listed a few examples above as well you can check out!

Will I be able to become a professional mentalist after this workshop?

Not just yet, But it can give you a great foundation on mentalism and enough material to even create your own routines

Would there be any certificate on completion?

Nope. Narpath is sharing his knowledge and you will convert that knowledge into wisdom

I made the payment but didn’t receive any email

Please write to [email protected] Our awesome support team will get back to you in under 6 hours.

What are items used for the workshop?

Mentalism is simple and uses very simple props. You would only need basic items like paper, pens, playing cards, etc. The beauty of mentalism is the beauty in its simplicity. Every item you would need is probably already at your home

No you can only watch them course videos online!

Do you have an affiliate program?

Right after your purchase, your access credentials will be sent to your registered email

Join 3000+ others and learn the art of mind-reading

"Hands down the best course I've taken to date!"

"Narpath has generously given away so much of his secrets"

"Learning these mind reading tricks makes me feel like a superhero"

GUARANTEED : Gasps of Amazement... Astonished Friends... And Jaws On The Floor.. You Are Just One Click Away 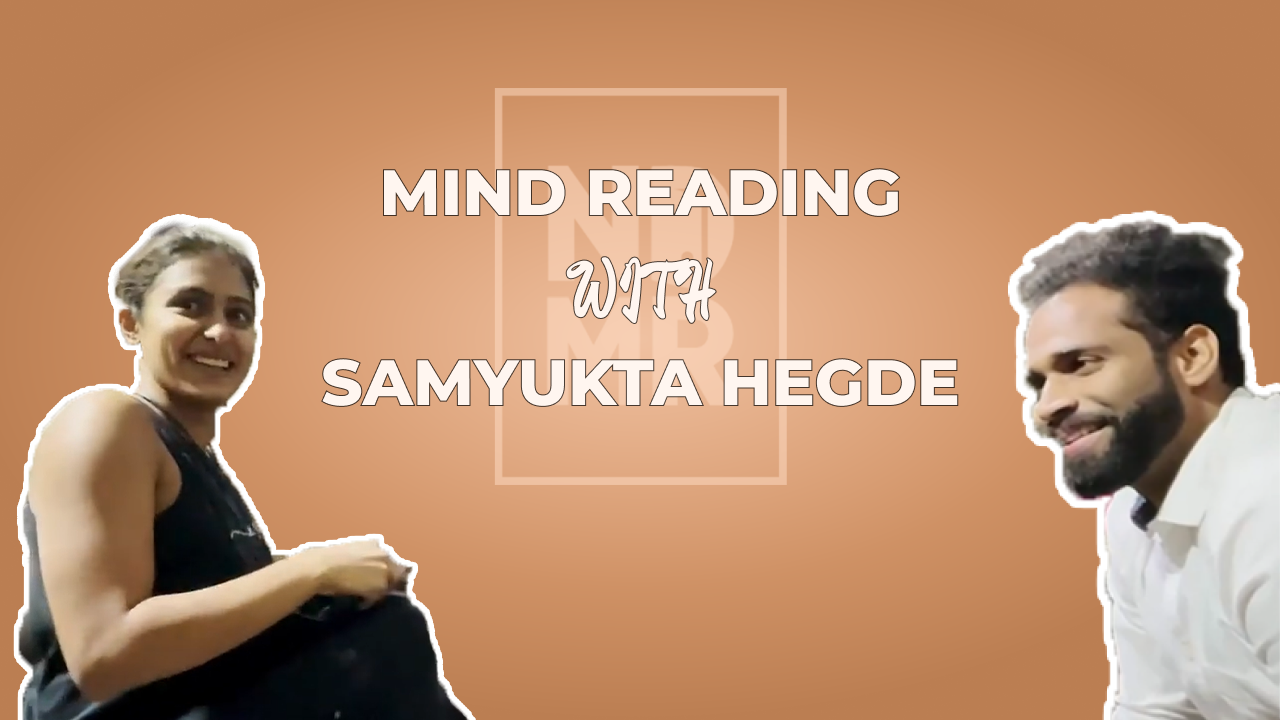 WAIT! BEFORE YOU GO

I Want To Show You One Of My Favourite Tricks! Just Sign Up Below! 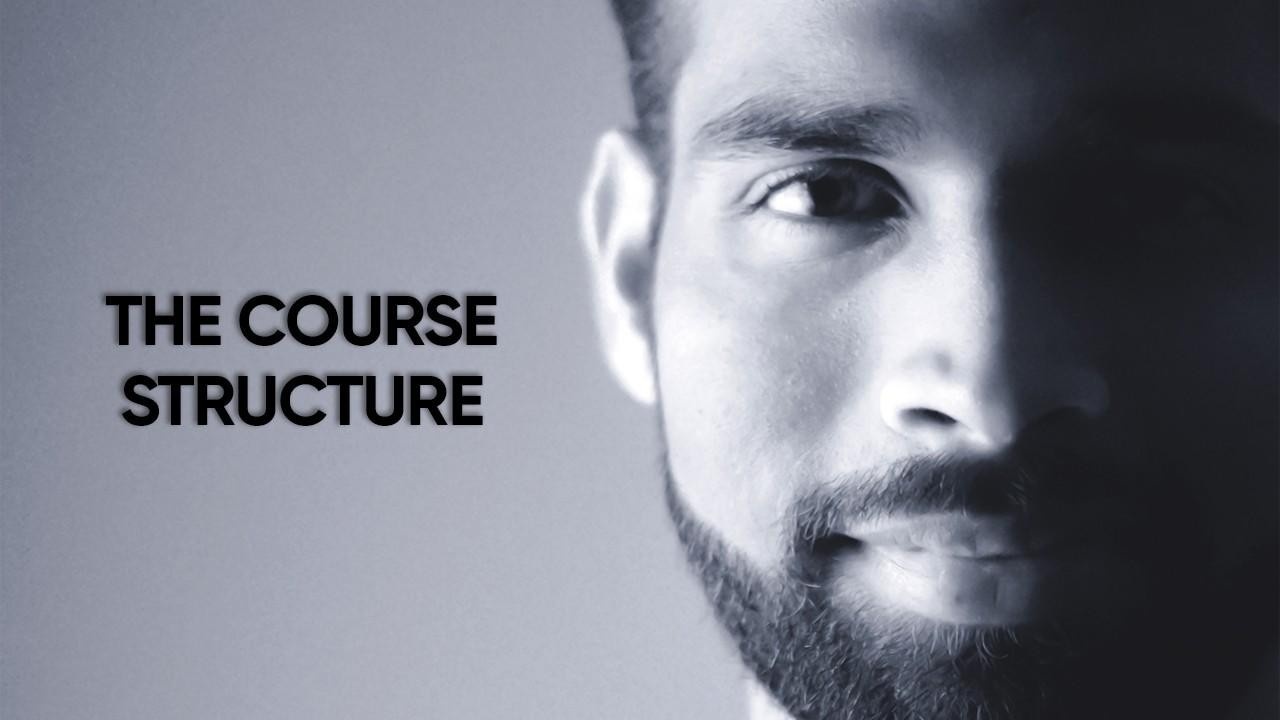